MoSi2  Heating element is a High-Density Material consisting of Molybdenum Disilicide and self-forming glaze of silicide dioxide. It can be used up to Furnace Temperature of 1800℃. These elements have a long service life.

MoSi2  Heating element is a special material that has the best properties of both ceramic and metallic materials. It withstands corrosion and oxidation, like ceramic materials and has a low thermal expansion. And it also has good thermal and electrical conductivity, like metallic materials. Thermal shock does not have any effect on the element and as a heating element, it can withstand many years of service because of its strength.

The resistivity of MOSIL (MoSi2) increases with temperature. When connected to a constant voltage, the elements attain high power at lower temperatures and the power gradually reduces with the increasing temperature, This shortens the time of the furnace to achieve the operating temperature. However, as the power of the elements reduces, the probability of element overheating also reduces.

The resistance of MOSIL (MOSI2 Heating element) does not age even when exposed to high temperatures during operation. The resistance drops only by a slight amount (≈ 5%) during the first period.

Due to the availability of such properties, a failed component can easily be replaced without affecting the performance of other components connected in series. 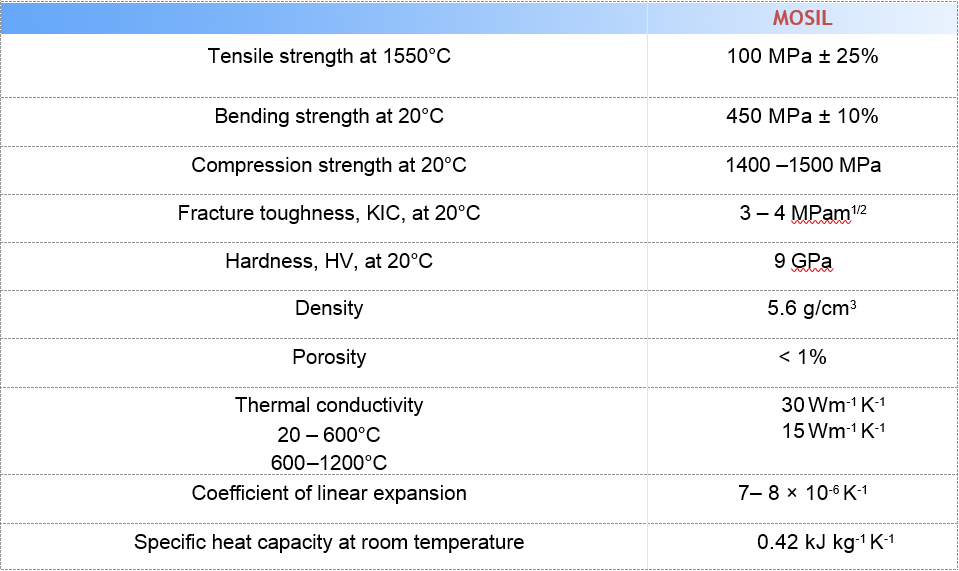 MOSIL (MoSi2) has remarkably high chemical resistance and hence, can be used in most furnace atmospheres. The most favorable conditions for MOSIL  (MoSi2) are oxidizing atmospheres such as carbon dioxide, air and water vapor, but MoSi2 elements also tend to operate well in carburizing, reducing and neutral atmospheres.

At lower temperatures, oxidation of silicon and molybdenum on the surface of the components occur at temperatures of around 500°C (930°F). The oxidized product formed is MoO3, which is a yellowish powder. This product formed usually has no prejudicial effect on the performance of Molybdenum Di Silicide components.

The atmosphere of Water vapor and carbon dioxide

Sulfur Dioxide (SO2) is a pollutant that is present in the atmosphere. It usually does not have any detrimental effects on the Molybdenum Di Silicide.

The Endogas has the following gas composition: 40% Hydrogen, 20% Carbon monoxide and balance Nitrogen. It is produced by burning natural gas in a limited supply of air. Due to the presence of hydrogen in endogas, the dew point, gas velocity and gas composition, are critical for knowing the maximum temperature.

MOSIL (MoSi2) components are broadly utilized in carburizing furnaces. The components that are not attacked by the atmosphere normally consists of nitrogen or an endogas with limited additions of a carburizing gas such as methanol or propane.

In this type of furnace, the temperature of the component is usually kept lower than 1400°C (2550°F). If there is a carbon build up in the furnace because of high carbon potential, it can lead to element failure. It is recommended to fire the furnace regularly under oxidizing conditions to remove the buildup of carbon.

The temperature range for the Nitration of ceramics to take place is in the range 1250 –1550°C (2280 – 2820°F). At such high temperatures, the protective layer of glaze is consumed, this might cause the silicon in the silicide of the component to react with the nitrogen, giving out silicon nitride (Si3N4). This formation of silicon nitride forms scaling on the component which is harmful. The components used for this purpose must be well heat-treated with Molybdenum Di Silicide to reduce nitrogen penetration into it. This treatment is mostly recommended when the operation takes place when the dew point is low and in an atmosphere of nitrogen.

These noble gases are inert in nature and do not react with Molybdenum Di Silicide. However, in the presence of a gas flow around the components, the chemical equilibrium of the component will be disturbed. At elevated temperatures, the protective glaze (layer) is reacted with and consumed. While utilizing such gases, it is recommended that a new layer of glaze is regenerated before the old glaze has worn out completely. Thus, a heating solution with Molybdenum Di Silicide is recommended.

In an atmosphere of dry hydrogen, MoSi2 heating element disintegrates by forming gaseous silicides and silicon with the low silicon content. The chemical reaction is dependent on two factors – the reduction potential of the H2 gas and the temperature. The maximum allowable temperature can be increased by increasing the dew point (see fig-1, diagram “Maximum element temperature in hydrogen atmospheres”). To reduce chemical attacks, the elements are installed in niches so that the gas flow is reduced between them. A heating solution with MoSi2 is recommended in a dry hydrogen atmosphere. 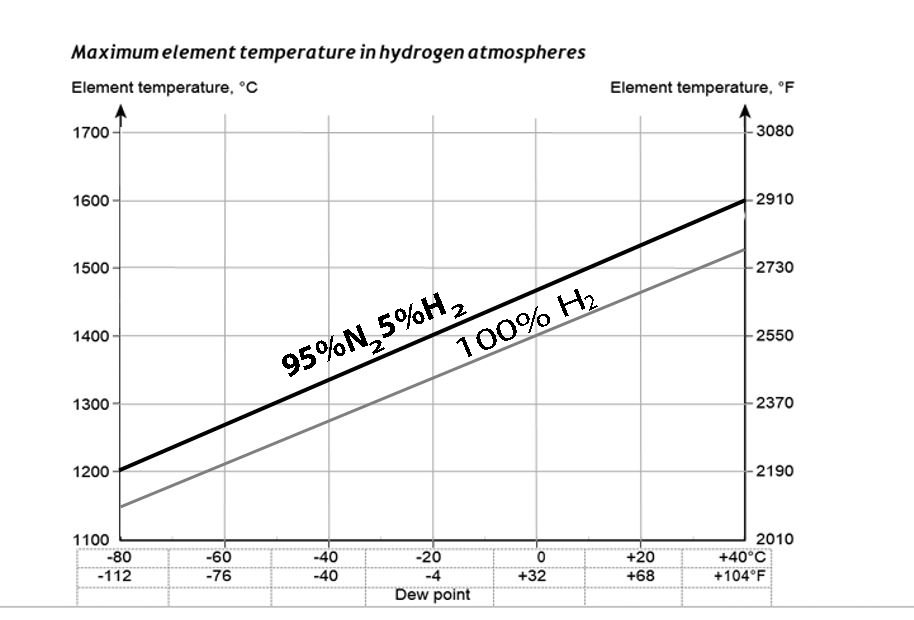 The combination of Nitrogen and Hydrogen is usually considered as hydrogen. Even though N2 reduces the reactivity of H2, the effect of hydrogen is substantial, especially with prolonged periods in operation. The gas velocity and the dew point of the gas mixture are always critical (see page 6, diagram “Maximum element temperature in hydrogen atmospheres”). The performance can be enhanced by special heat treatment methods. Hence, a Heating solution of MoSi2 is recommended.

The halogens react with Molybdenum Di Silicide vigorously along with oxidized elements, at temperatures below 600°C (1110°F). Both chlorine and fluorine are produced by dissociation of organic compounds, which often enters the furnace along with contaminated components. 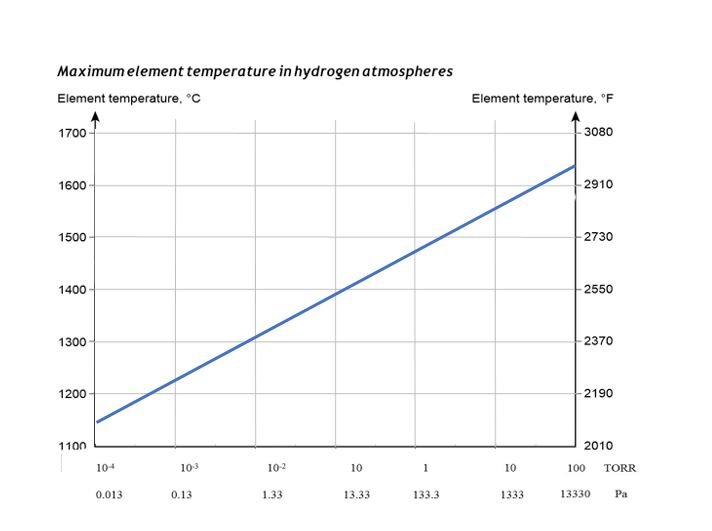 All metals in contact react with MoSi2, producing silicides. At elevated temperatures, vapors from molten metal, (bronze, zinc, and copper) also tend to react with the components. Dust particles from metal oxides in the furnace also react with the protective glaze. It is critically important for the components to be protected from the splashes of molten metal. With proper precautions, metals having a melting point below 1300°C (2370°F) can be melted in this type of furnace.

Alkali compounds like Na2O and K2O in the furnace atmosphere act as fluxing agents on the silica layer and reacts with the component. The salts of the alkali also tend to react with the components present in glass melting furnaces.

It is critically important to choose the lining material for the furnace wisely when the operating temperatures are above 1550 – 1600°C (2820 – 2910°F). Refractory Castables consistently contain alkalis. Depending on their chemically bonded nature they can be more aggressive or less aggressive while reacting with Molybdenum Di Silicide.

Reactions take place with ease between the silica layer on the component surface and most salts and oxides, as the operating temperature of Molybdenum Di Silicide is usually high. This subject is of critical importance when the components are supported by ceramics. The ceramics in such cases must consist of stable compounds like silicates, which are non-reactive with silica. Sillimanite and mullite are two suitable ceramics. When component temperatures exceed 1600°C (2910°F) reactions can no longer occur.

The lowering of the viscosity and cause of the slow flow of glaze down the element is mainly caused due to the fluxing effect of the glass furnace’s atmosphere. However, this usually has no prejudicial effect on the life of the component.

Two-shank U- shaped element is the most commonly used design. The heating zone is welded to terminals. These terminals normally have a diameter double than that of the heating zone.

The two-shank element can be bent 45° or 90° either in the heating zone or in the terminals, Four-shank elements are used only horizontally 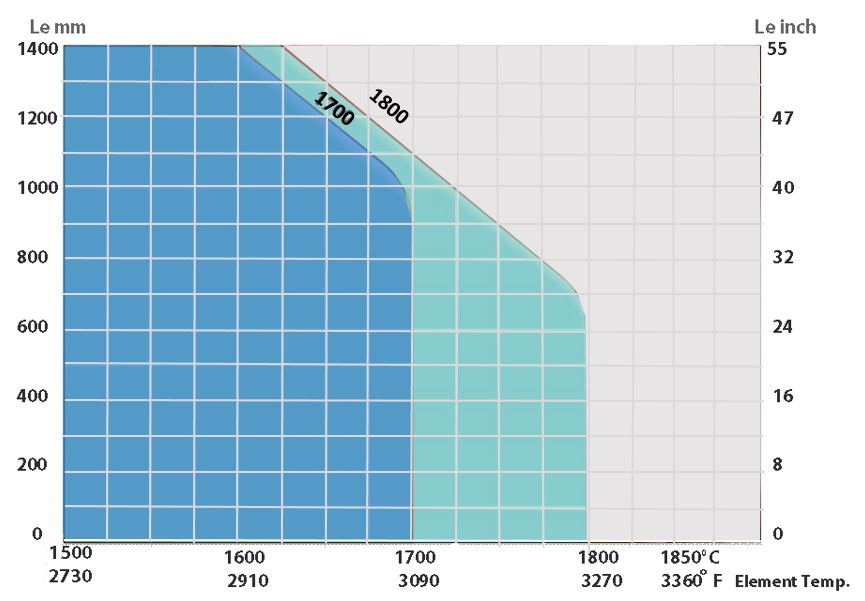 For further information on MOSIL…